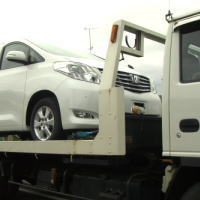 The features of the exterior are long-nose/short deck coupe style with pop-up headlights and side window design called Chinese's eyes. The independent double wishbone/coil suspension, equipped with the disc brakes, has been adopted. Moreover, the magnesium wheels has been adopted. The interior uses rosewood panels.